Fee months back , I wrote an article on how to speed up Firefox 3 . But that method actually concentrated on few manual optimization methods for tweaking Firefox memory usage and other network settings .But there are few software tools that can reduce the normal Firefox memory usage to near 880KB and network speed to almost double the existing value . 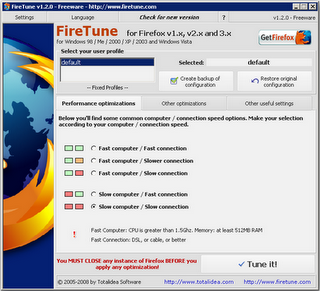 You can speed up firefox 3 by optimizing Firefox’s hidden network settings . Firetune is a free software that adjusts these settings semi-automatically  .

You can select your computers’ configuration profile and tweaking a tweaking based on that.

Firefox 3 is really a memory hog , if lot of addons are used or when multiple tabs are opened . In my case it went to approximately 100MB as shown below .

After using Firefox ultimate optimizer ,memory usage was reduced to an amazing 960KB . 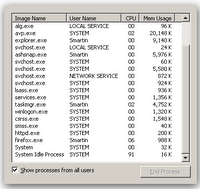 I don’t know how they made it possible . But it is possible anyways :-).

Requirements are .NET framework 2.1 and Microsoft Windows XP (All versions) .