Its almost one year since Steve Jobs confirmed the background development of Mac OS X 10.6 Snow Leopard . Snow Leopard had undergone numerous changes and fixes during this one year of  in- house development and beta testing .And now its announced to be almost to be ready for final  release on September of this year . Mac OS X 10.6 will succeed most recently released Mac OS X 10.5.7 Leopard . Snow Leopard  primarily focuses on the Apple’s Intel range machines to improve speed ,performance and to get a  reduction in consumption of system resources .OS X 10.6  will contain  QuickTime X (10), the upcoming version Apple’s popular cross platform media player . 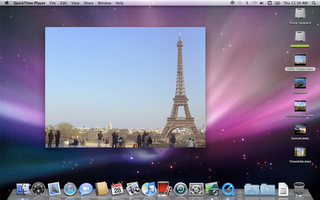 As per reports , Snow Leopard 10.6 takes only near twenty minutes for full  installation .And its far better when compared with one hour installation time of Mac OS X 10.5  Leopard.
There are so many improvements in overall system performance which would results faster opening of images ,movies and documents .