This year would see the war of web tablets. We already have two in the list, Joojoo from Fusion Garage and Archos 5 Internet Tablet. HP and Microsoft today announced another one to the growing list, by announcing upcoming availability of a mobile tablet based on Microsoft Windows 7. The tablet called the HP slate was announced by Microsoft CEO Steve Ballmer. The other proposed web tablet are either based on Android or custom OS. So the HP web slate would attract a set of people who use Windows and Windows applications daily. The smaller touch based interface makes it an easy to carry web companion and reader. The price of the HP slate would be higher then Windows mobile phones and netbooks. 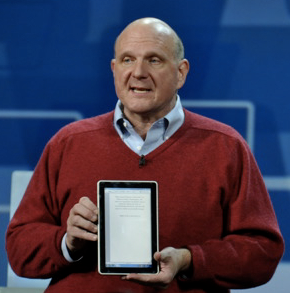 HP web tablet has multi-touch, can install Windows applications and run games. The device measures in around 7 inch in size. Sources also reports that HP is also planning an Android based web tablet.