Android OS is an open source mobile operating system owned by Google  and developed by the Android developer community. Android is based on Linux, and it is widely used in mobile phones, and also waiting for its entry into tablets and netbook computer segment. Though it is a mobile OS, we can virtually run Android on Linux, Intel Mac and even in Windows. Live Android is a special compilation of Android OS in a CD ISO image form, that we can use to boot Android from a USB drive or CD. We can also use a desktop vitalization application like SUN VirtualBox and install (virtually) or operate Android OS in Windows and other OS platforms. Though we cannot exactly reproduce and use Android just like as in mobile phones, give it a try if you are planning to buy an Android device or curious to know about its user interface, menu options, etc. Here we will point you to the Live Android download, and help you to  install Android OS in Windows, virtually using SUN VirtualBox application.

Enter the name as Android and Operating system choice as Windows XP, Windows Vista or Windows 7. In all upcoming steps, click next after competing with all the required instructions given below.
Set memory. (keep it as default)
From radio buttons, create new hard disk.
Select Dynamically expanding storage .
Set Android virtual disk location and a suitable size (say 20GB)
Now click Finish to create a new Android VirtualBox.

Now from VirtualBox interface select Android and click start .
First run wizard opens.
In next step, select media source as image and browse to the location of the joined Live Android .ISO image .
Let the wizard complete. It will open the the Android OS  home (given below) after execution. When we click mouse anywhere, it will pop-up a box- click capture and continue. 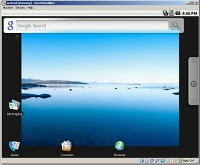 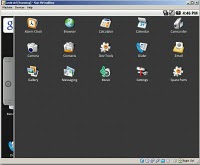 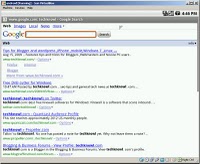 with corresponding devices given in that page; however, you could use the same ISO files to create bootable USB disks (using Unetbootin ). Follow the procedure given in the Unetbootin website to build a Live, Android USB disk.