A worm is a computer malware that spreads itself through computer networks ,USB disks and other storage mediums . Indication and details Conficker worm was given by Microsoft in last October .Since then  Conficker had different modifications and new versions .

As per per the rumours from security labs and blogs , about 10 million computers are already infected with variants of Conficker worm . And the worm would outburst in April 1st of this year to perform unknown destructive actions.We already have a post to remove Autorun worms affecting Windows autorun command . Unfortunately, this will not work with  Conficker worm .Conficker worm is known in different names with different antivirus  vendors and all of them have released  conficker removal tools . Download few conficker removal tools here .

Though their are some conficker removal tools , none of security experts are sure about their effectiveness with latest variants .

Conficker worm would also collect personal informations including user details/bank passwords and send them to botnets and attack websites associatedwith the code . 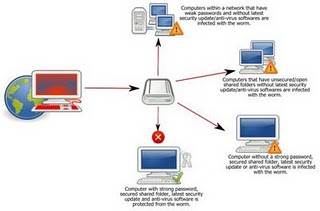 Conficker worm execution at April 1st might turn into another April fool joke . But as per advice from Microsoft ,Kaspersky ,Eset ,Symantec and other Antivirus vendors , the worm Conficker exists . So be prepared with  conficker worm removal tools to make make your computer secure against any future attacks .

Keep your Antivirus software updated . All antivirus vendors are daily releasing updates to detect and cure new variants of the Conficker worm .