You might have the caps of (screen captured images)of videos in forums and other websites . There are many software tools to get images from video files . RichFLV is one one such application which can capture image screenshot specially from Youtube or FLV videos . RichFLV is not just a screen capture tool ,its an FLV editor and can convert and modify FLV media into number of other formats .

How to use Rich FLV to capture images from FLV videos: 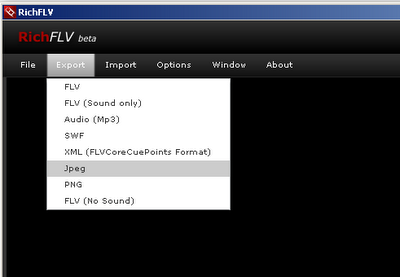 Open a Youtube video and pause at suitable location where need to get an image .
Now move on to export tab and select PNG or JPEG as images format . Similarly as you can see in the screenshot , FLV files can be saved into formats like FLV(with no sound) ,XML, SWF (Flash) and  mp3 . There are some more options to stitch ,edit and modify FLV videos .

RichFLV is completely free ,but you will need to get Adobe AIR framework for installation .